While the specialty coffee industry has drawn attention to the threat of climate change to the sector, this awareness has not spurred widespread action in the broader coffee market.

Those who are most exposed to the imminent consequences of global warming are the
smallholder growers that constitute nearly 80 percent of all coffee farms worldwide.

Not all hope is lost, though. Some smallholder producers have decided to tackle the problem directly instead of assuming the role of passive observers. One of the pioneering communities determined to proactively mitigate the effects of climate change is located on the ▽ Caribbean coast of northern Colombia.
This is the story of a day in the life of one of the leaders of this effort.

It is 5:37 on a warm morning during the harvest season in the ▽ Sierra Nevada de Santa Marta — the world’s highest coastal mountain range. At an altitude of 1,105 meters, Jaime García — an amiable-looking, sturdy, graying man in his early 50s — is sipping on his favorite tinto while the clouds slowly climb the nearby ridge covered with jungle.

All of a sudden, he notices among the trees the sapphire-blue bill of a paujil — an endemic and now rare jewel of Colombian avifauna. It is up to him to guard this small piece of the Sierra so that his children can experience it the way he does.

Before the sun rises, García is already at his lot. His first job is to methodically scan for weeds and remove them with heavy, precise blows of his machete. Afterward, he inspects a representative random sample of the 2,715 trees on the lot for signs of the coffee borer beetle and, whenever he finds any, marks the area around it for immediate picking. As the entire production is organic, he fights unwelcome plants and bugs manually or mechanically. In this way, he risks losing the entire crop, but he decided long ago that he will not sacrifice the multifarious flora and fauna of the jungle for short- term profit.

In fact, back in the 1980s — before organic certification existed — García co-founded an unofficial association of farmers that undertook initiatives to prevent soil erosion, conserve watersheds and reforest the mountain.
The community called them the “protectors of the Sierra”.

When the armed conflict broke out and expelled all coffee growers from their land, the initiative stopped in its tracks and, unfortunately, took some of its founders along with it.

Eventually, the region re-emerged from these dark days of coffee growing. The catalysts were visionaries like García and practical people like his friend Miguel Hernandez — who is 58 years old, wiry and suntanned.

“I can’t help but grow coffee,” Hernandez says. “It would be a sin not to. God has given us unique biodiversity.
→ The soil is fertile. The humidity and temperature of the air are perfect. The long-lasting summer allows the coffee to grow and ripen abundantly in the shade.
And most important of all — we can grow really good coffee entirely naturally.”

The sturdy coffee farmer is over the rough times of the past and prefers to focus on the crop. García stands near the several seasonal helpers he has employed for the harvest and bends the flexible tree branches down to gather one precious fruit after another. In these moments, he has time to reflect on the state of coffee in this region.

Besides the ever-fickle prices, the most pestilent long-term challenge is climate change. The rainy season often starts significantly later, delaying the flowering of the coffee plants, or arrives too early, bringing calamitous downpours. In October 2018, for example, the quantity of rain exceeded the average by three times. In combination with the heat, this excessive humidity creates a perfect breeding ground for the disastrous coffee rust fungus.

These thoughts are not unusual for the coffee grower. García might live in a remote village off the grid, but he has been a caficultor since he was 12 years old and knows his business inside and out.

Recognizing this, neighbors elected him as the legal representative of their association. Once a month he travels for hours down the muddy mountain roads to ▽ Santa Marta, the nearest big city, to meet the leaders of fellow associations and exchange knowledge.

This joint effort resulted in the foundation of a successful nonprofit organization 15 years ago — Red Ecolsierra (abbreviated for the “Network of the Ecological Producers in the Sierra Nevada de Santa Marta”). Its members have received organic and fair-trade certifications, and it has turned into a springboard for direct exports. García knows, however, that they must do more to actively guard the environment and their community once again, because otherwise it might be too late.

During one recent meeting, a comment was made by another local visionary — Mildred Niebles. She is one of the few farm owners with a university education and Q-grader certification. This is an especially impressive achievement considering that she has raised three children as a single mother and was shot at and expelled from her land during the armed conflict. Read more about Mildred’s incredible story → here.

“We are direct victims of climate change,” Niebles notes. “The rainy season has become unpredictable, which has been damaging the crops. The biodiversity in the Sierra is also at high risk, as we all know.”

Indeed, three species endemic to the region have been recently declared as critically endangered, and this has raised awareness. The blue-billed paujil is one of them.

Colombia is an equatorial country, so the sun sets early — at 5:40 on this October evening. Today, García and his crew have picked and pulped coffee cherries, set the seeds to ferment, prepared yesterday’s batch for drying, and sorted out defective beans in an already dried batch. Pleasantly exhausted, he walks back to his house, taking his time to breathe in full gulps of the fresh air. This has always been his home, and all of his six children and eight grandchildren were born here.

The ▽ Sierra Nevada is one of the most prominent mountain ranges in the world, with the highest peak reaching 5,700 meters only 42 kilometers from the sea coast. This allows unparalleled biodiversity to thrive in its coffee belt, which extends from 900 meters to 1,900 meters above sea level.

The natural reserve that covers the higher slopes of the mountain just above the coffee farms was recently identified as the most irreplaceable in the world for threatened species.

The climate in this region is also special. → The dry season is long, while the rainy season is short and intense. ← This allows only one harvest per year and requires the coffee to grow in the shade of other plants, which in turn prevents the soil from erosion and protects the watersheds, securing water for the cities below. It is also a habitat for endangered species. This closes a virtuous cycle that benefits both the coffee grower community and the environment. The exceptional environment produces characteristically flavored, high-quality coffee that requires sustainable production practices to grow, which in turn benefits the unique nature of the place.

It is 9:37 p.m. and García is already in his bed, indulging in dreams for the future, which have started to appear brightly. The Red has listened to the community and has launched a new initiative, empowering 70 of its members to become “Guardians of the Sierra Nevada.”

The leader of the nonprofit organization — Victor Cordero, himself a coffee grower and passionate advocate of self-reliance — recently explained the initiative.

“The program is the brainchild of all of us,” Cordero says. “It is based on the beliefs and the traditions of generations of farmers and supports with know-how and financing any of us who demonstrates an outstanding record of implementing innovations for the improvement of the coffee quality and determination to preserve the environment.”

García is, of course, one of the guardians. “A guardian is not only a title,” adds Cordero. “A guardian is actively regenerating the jungle and the watersheds, not only by cultivating shade-grown coffee but also by creating a nature reserve on his property.”

If enough coffee growers create such reserves, they will form natural corridors for wildlife, including endangered species, to move freely in a region that for decades has been deforested — often for the cultivation of illicit crops. The reserves offer an additional benefit to the coffee growers—they can produce 100 percent natural honey in them, thus diversifying their income sources.

García falls asleep with a smile on his face. The steps he and his fellow coffee growers are undertaking to mitigate the impact of climate change are tiny in the great scheme of things, but critically important. They are setting an example that he knows will resonate with the international coffee community and beyond. 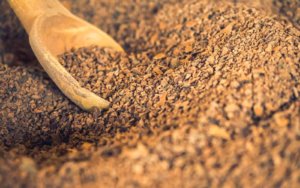 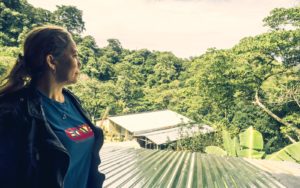 At an altitude of 1,105 meters, Jaime García is sipping on his coffee while the clouds climb the nearby ridge covered with jungle. […] 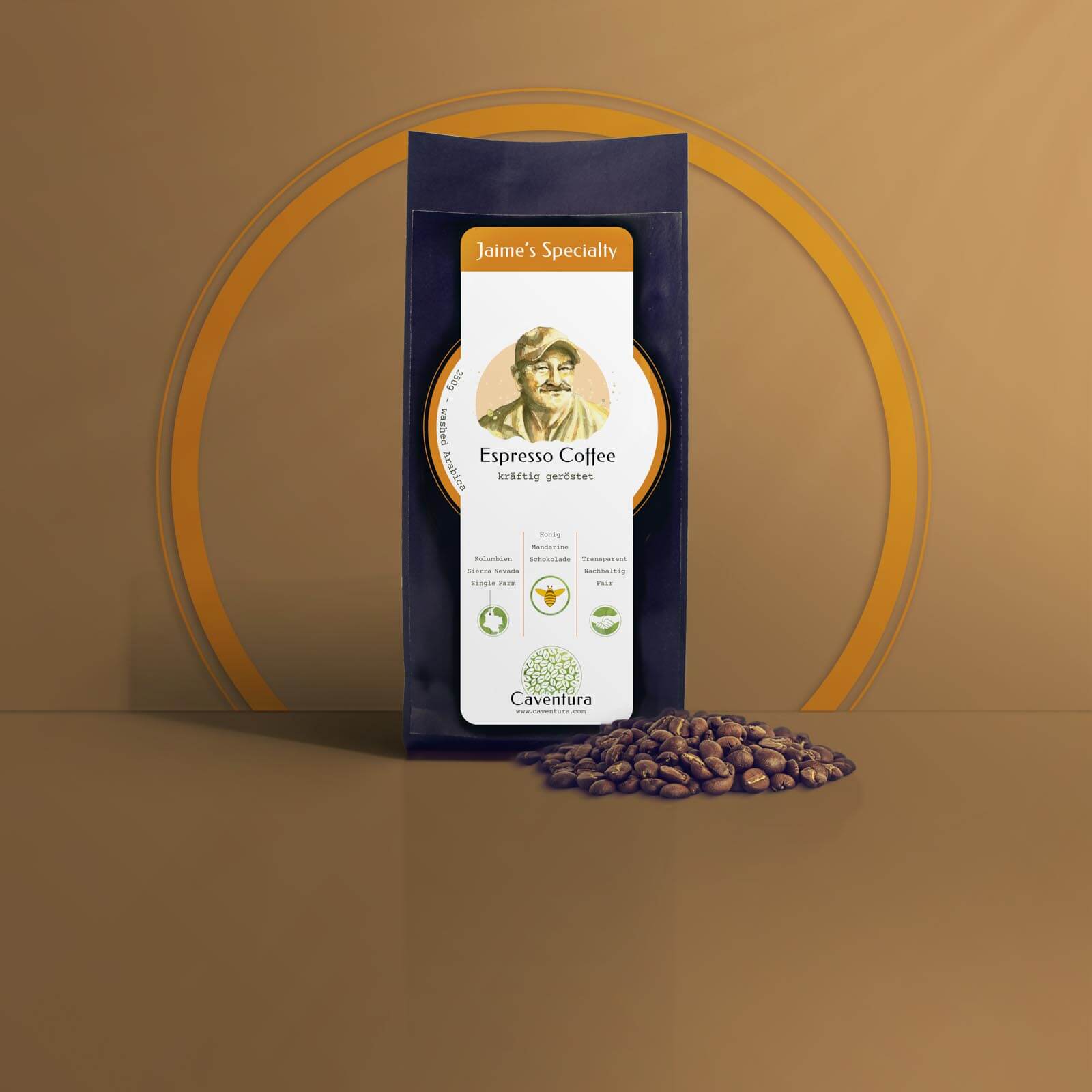